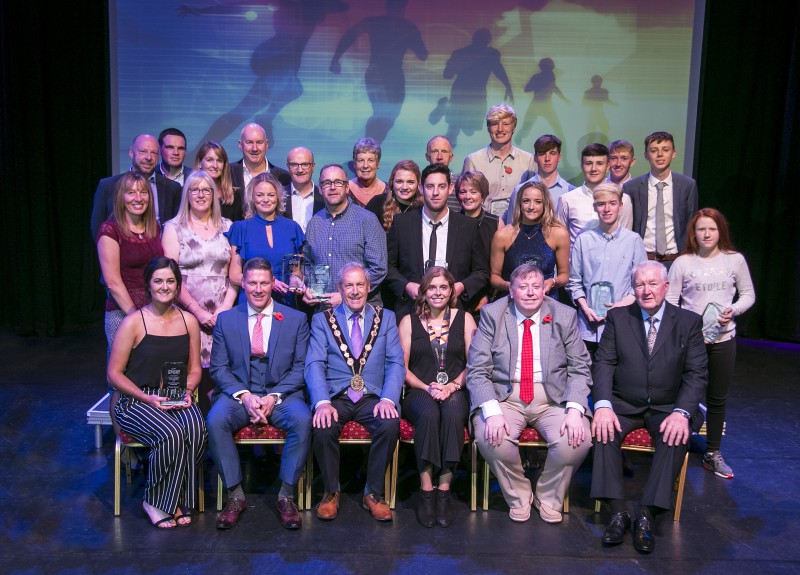 The event, which was attended by over 200 guests, was hosted by Sports Journalist, Thomas Niblock and included an in depth interview with Women’s Hockey World Cup Silver Medallist and Captain of the Ireland Team, Katie Mullan.

Golfer, Paula Grant was named Sports Personality of the Year. This year, Paula was selected to play for Great Britain and Ireland in the Curtis Cup, which is the female equivalent to the Ryder Cup, making her only the 6th representative from Northern Ireland in the past 86 years to have achieved this prestigious honour.  Her steadfast performances throughout the year led to this selection, placing Paula as the highest ranked Irish player in a number of tournaments. Gold Medallist in the World Masters Athletes Event and Irish record holder, Kelly Neely was awarded second and Irish Downhill Champion and World Downhill Masters Champion, Colin Ross third place in this category.

Due to the overwhelming number of nominations this year, the Junior Sports Personality of the Year was divided into two age categories, under 15 years and under 19 years. The U15 category was won by 12 year old table tennis star, Sophie Earley who had an unstoppable 2018, emerged victorious in a number of tournaments all over Ireland, including achievements at senior level.  Sophie also was the only European representative in her age category to compete at the prestigious World Cadet Challenge in Japan. Second place in the U15 category was presented to Judo Gold Medallist and multi-sport athlete, Lloyd Andrews and third place was won by Cathal Brugha Water Polo Club goal scorer and Silver Medallist, Eva Ramsay.

The U19 Junior Sports Personality of the Year title was won by fencing and multi-sport athlete, Charlotte Slater who enjoyed a tremendous year, becoming the national champion in fencing for the third consecutive year and ranked number one at U17 and U20 level. Charlotte also played for the developing St Patricks Senior Ladies Gaelic Football Team and she represented the Northern Cricket Union as well as gaining international caps in netball. Second place in this category was awarded to the Junior Giants Ice Hockey Captain and U18 GB women’s ice hockey team representative, Kaitlyn Morrison while third place was won by school hockey captain and Ireland and Ulster U18s representative, Andrew Edgar.

“A wide range of sports are represented across all nominations, which highlights the diversity of sport within our Council area and the opportunities that are available to the local community to get involved in sport or try a new activity.

“We also have a number of sports stars residing in the Council area, who provide inspiration to clubs and athletes striving to compete at the highest level. I would like to thank Katie Mullan for taking the time to attend the Sports Awards and I know listening to her story about Ireland team’s success at the Women’s Hockey World Cup will provide great encouragement to the next generation of local sporting heroes.”

The Council has endeavoured to support these teams and individuals who aspire to reach the highest levels of performance and competition but they also aim to encourage greater physical activity in the wider community by delivering programmes to help those wishing to improve their fitness or take part for the fun and enjoyment of sport.

“Within Lisburn & Castlereagh, the Council takes pride in providing first class facilities for visitors and athletes such as Lagan Valley LeisurePlex and Dundonald International Ice Bowl. It also offers a varied programme of activities through the Council’s Sports Development Unit such as the highly popular Lisburn Half Marathon, 10k and Fun Run, which attracts over 6,500 participants per year, as well as the successful Every Body Active 2020 programme which helps people take their first steps on the road to physical activity.

Adrian Daye from Jog Lisburn Running Club was presented with the Coach of the Year Award for his hard work and dedication developing the club. Second prize was awarded to Adam Louden from Lisnagarvey Ladies First XI Hockey Team and third place Ciaran McGurk of Cathal Brugha Water Polo Club.

The Merit Award was presented to four individuals to recognise the essential and valuable service they provide to their clubs in the pursuit of success in their chosen sport. The Junior Award was achieved by James Nicholson from Carryduff Taekwondo Club while the Senior Merit Award was awarded to Michael Tiffen from Lisburn Taekwondo Club, Stephen Gilmore from Lagan Valley Orienteering Club and Ronnie Smyth from Annadale Hockey Club.