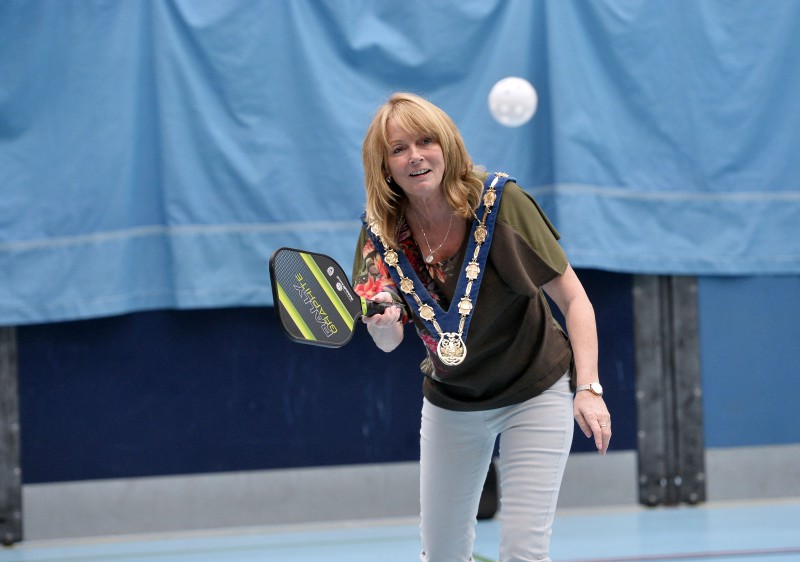 Growing in popularity in recent years, Pickleball was established in the USA sometime during the 1960s as a combination game of tennis, badminton and table tennis.
What initially started as a fun family game, gradually developed into a recognised sport with championship competitions taking place globally.

Following the success of last year’s Inter-Club Tournament in Glasgow, Stephanie organised this year’s event to take place in Northern Ireland at the LeisurePlex. A total of 76 participants competed in the tournament with representatives travelling from as far afield as Glasgow, Aberdeen, Wales and Republic of Ireland.

Speaking at the tournament, Lisburn & Castlereagh City Council’s Deputy Mayor, Councillor Amanda Grehan said, “Over the last four years the Council has assisted in the development of the Lisburn Pickleball Club through providing equipment, court time and support and I am delighted to see that the Pickleball community is growing within the Lisburn and Castlereagh area.  Stephanie has worked extremely hard over the years in relation to the Club and I commend her on her commitment in bringing something new to Lisburn City, both the sport and this tournament. I look forward to seeing how the Club and Tournament progress in the years to come.

Speaking at the event, Stephanie said, “Pickleball is excellent for keeping fit, both physically and mentally.  It is extremely easy to pick up and can be played at any level.  There is also a great social side to the sport and I would encourage everyone to give it a go.  This year’s tournament at Lagan Valley LeisurePlex has been a massive success and I look forward to next year’s tournament in Yorkshire before welcoming it back hopefully to Lisburn in a few years.
Previous
Next