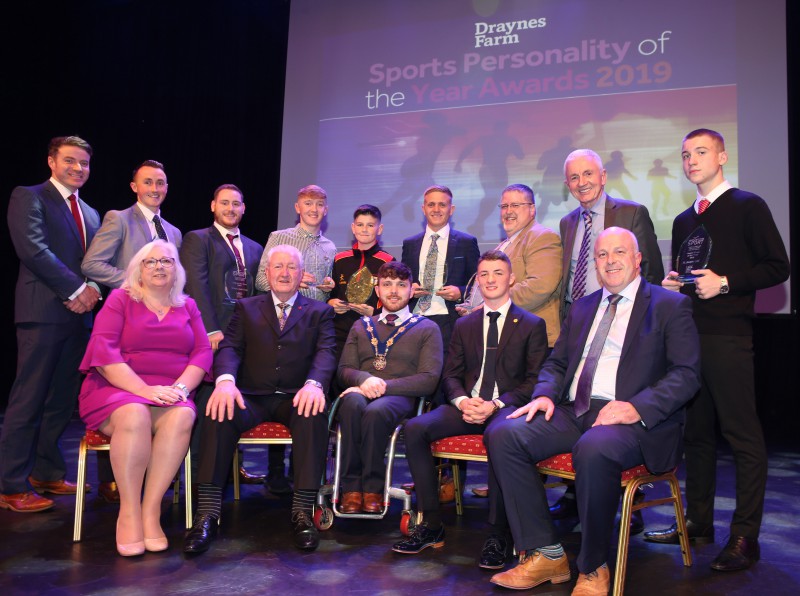 The event, which was attended by over 200 guests, was hosted by Sports Journalist, Thomas Niblock and included an in depth interview with gymnast Rhys McClenaghan on his superb Commonwealth, European and Word Championship medal successes.

Boxer, Kurt Walker was named Sports Personality of the Year. This year, Kurt had a sensational year from winning a gold medal at the 2019 European Championships in Minsk to a spectacular display at the 2018 Commonwealth Games to obtain a silver medal. With his unanimous victory over Mykola Butsenko of Ukraine in the European Championships, Kurt has proven he can compete at the highest level against a group of very talented boxers. Crossfit Irish number 1 and Commonwealth Games athlete, Emma McQuaid was awarded second and Special Olympic World Games gold medallist, Sarah-Louise Rea third place in this category.

Junior Sports Personality of the Year was won by golfer Aaron Marshall who had an unstoppable year becoming Irish Boys’ Amateur Champion and securing a prestigious spot representing Great Britain and Ireland against Europe in the Jacques Leglise Trophy. Second place was presented to 800 metre athlete Victoria Lightbody who achieved 1st in the UK at under 16 level and 3rd in Europe, while third place was won by Taekwondo medallist Amy Stewart who impressively racked up over 20 medals this year.

A wide range of sports are represented across all nominations, which highlights the diversity of sport within our Council area and the opportunities that are available to the local community to get involved in sport or try a new activity.

“I would like to thank gymnast Rhys McClenaghan for taking the time to attend the Sports Awards and I know listening to his story about his medal successes at the Commonwealth Games, European Championships and more recently the World Championships will provide great encouragement to the next generation who inspire to excel within their sport on a world stage.”

Alderman James Tinsley Chairman of the Council’s Leisure & Community Development Committee added, “Lisburn & Castlereagh has a proud history of sporting success and tonight we have celebrated the achievements of current sporting champions who have competed at national, Commonwealth, European and World Championship level which showcases the calibre of sporting talent in the Council area.

Lisburn & Castlereagh City Council has endeavoured to support these teams and individuals who aspire to reach the highest levels of performance and competition but they also aim to encourage greater physical activity in the wider community by delivering programmes to help those wishing to improve their fitness or take part for the fun and enjoyment of sport.

“The Council takes pride in providing first class facilities for visitors and athletes such as Lagan Valley LeisurePlex and Dundonald International Ice Bowl. It also offers a varied programme of activities through the Council’s Sports Development Unit such as Couch to 5k, Parkrun, Bootcamps and the popular Lisburn Half Marathon which helps people take their first steps on the road to physical activity. This year the Council also launched their new Vitality Membership which offers households and individuals access to an extensive range of activities, classes and courses across all six of the Council’s leisure facilities which helps more people, get active more often.

Martin McGann from Lisburn City Swimming Club was presented with the Coach of the Year Award for his hard work and dedication developing the club. Second prize was awarded to Amy Irwin from Dundonald National Ice Skating Association and third place was shared with Abigail Hall from Ballymacash Rangers Youth Football Team and DJ Morgan from Carryduff GAC.

The Merit Award was presented to three individuals to recognise the essential and valuable service they provide to their clubs in the pursuit of success in their chosen sport. Awards were achieved by Jenny Cosgrove from Lisburn Triathlon Club, James Corry from Lisnagarvey Hockey Club and Garry McGuigan and Gavin Price from Lisburn Distillery Football Club.