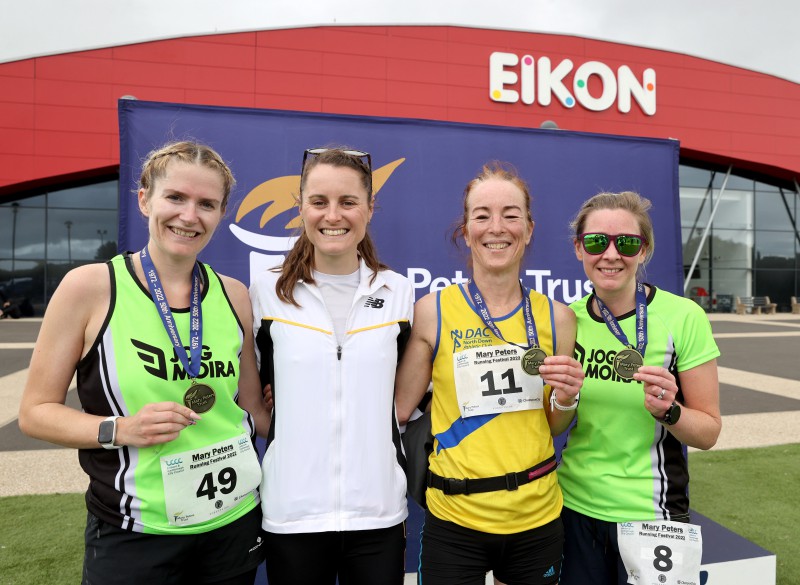 Energy levels soared at the Mary Peters Running Festival as over 500 runners descended to the start line at the Eikon Centre in Lisburn. The special running event was organised to mark the 50th anniversary of Lady Mary Peters historic Gold Medal at the Munich Olympic Games.

The highly successful event hosted some of the countries most talented runners who took on the challenge of a Full Marathon, 20 miler or Half Marathon event. Families and beginners also got involved in the popular 10K and 5K routes.

In the City’s first full marathon, top honours in the men’s event was awarded to Adam Harvey while Norman Mawhinney took a well-deserved second spot and Stephen McAuley third. In the ladies marathon, Sarah Benton made it onto the podium in first place, with Jane Leathem taking second place and Jenny Steele finishing a strong third.

John Ward achieved first place in the 20 miler, closely followed by Alister Jamison in second place and Laurence Corr in third. In the ladies event, Fiona McFall topped the podium in first place, while Eimear McCracken and Pamela Kirk battled it out for second place with McCracken prevailing by thirty three seconds.

In the popular half marathon, Aaron McAuley crossed the finish line in first place followed by David Graham in second place and Steven Paul in third place. In the ladies category Irene Clements excelled to first place, with Katie Parker securing second place and Hannah Ewart in third.

The 5K was keenly contested with Ricky Johnston picking up first place, followed by Ben Gillen in second and Stephen Lyster in third. The ladies event was proudly won by Grace Bennett who made it home in first place. Second place was won by Geraldine Quigley in second and third place Sophia Barr.

Attending the event, Gillian Hetherington from the Mary Peters Trust said, “It was fantastic to see so many participants come out in force to mark Lady Mary Peters historic 50th anniversary.

“I was delighted to cheer on so many people of all ages and running experience around the routes, particularly those taking on the challenge of the City’s first full marathon.

“Participants were also greeted by special guest 1500m Olympic athlete, Ciara Mageean, who offered further motivation and inspiration to both runners and families. Ciara who is a Mary Peters Trust alumni athlete also brought along her European and Commonwealth silver medals, which provided a great treat for many participants who had the opportunity to have a selfie with Ciara and the medals! ”

“Finally, I would like to thank Championchip Ireland, Lisburn & Castlereagh City Council and Forestside for supporting the event, which will make a real difference to supporting athletes and clubs across Northern Ireland.”