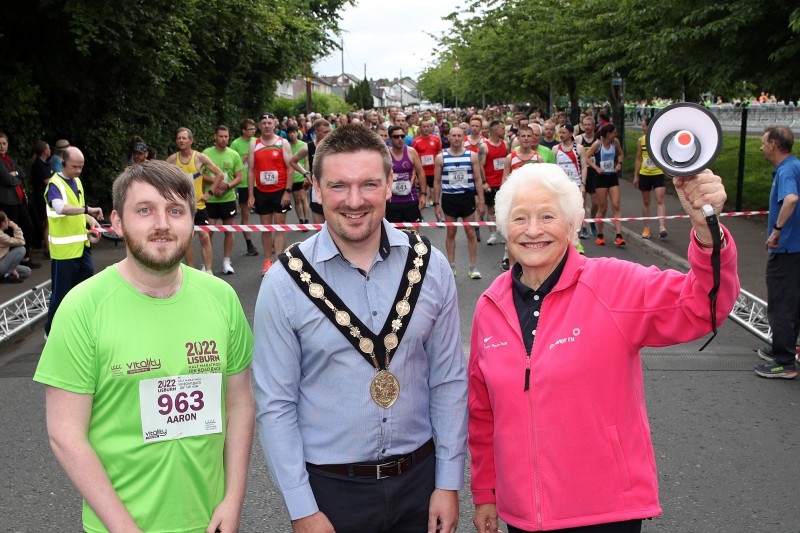 Adrenaline levels soared at the Vitality Membership Lisburn Half Marathon, 10K Road Race and Fun Run as thousands of runners descended to the start line to take part in the eagerly awaited races. The popular event returned to the streets of Lisburn on Wednesday 22 June after a 3 year absence following the pandemic.

Some of the countries most talented runners crossed the finishing line with the impressive Karen Alexander taking top honours in the women’s Half Marathon, while Leeann Gibson took a well-deserved second spot and Fiona McFall third. In the men’s Half Marathon, Conor Gallagher made it on to the podium in first place, with Chris Madden taking second place and James Hamilton finishing a strong third.

Gemma McDonald crossed the finish line in first place in the women’s 10K, followed by Martsje Hell in second and Elisoa Crawford in third place. In the men's 10K, Gareth Lyons finished in first place, closely followed by Tom Baird in second place and Stephen Whylie in third.

The Fun Run was keenly contended with Anna Broderick picking up first place in the female event, followed by Katie Mulholland in second and Isla Wiltshire in third place. The male Fun Run event was proudly won by Luke McCausland who excelled to first place. Second place was won by Ashton Cusick and third place Finn Powell.

Starting the Half Marathon event, the Mayor of Lisburn & Castlereagh, Councillor Scott Carson said, “The Half Marathon, 10K Road Race and Fun Run have been firm favourites with runners and families for almost four decades. Tonight is very much the first step to normality as we continue to build on the success of the event once again.

“I was delighted to cheer on so many people of all ages and levels of running experience at the startline, particularly those taking on the challenge of their first Half Marathon.

“The Council is delighted to organise so many sporting events, similar to this one, which provides such a positive platform to encourage people to lead a healthy lifestyle.

“Finally I would like to thank everyone for supporting the event and helping to raise donations for my Mayoral Charities, Helping Hands and the Atlas Centre”, concluded Mayor Carson.

The Chairman of the Leisure & Community Development Committee, Councillor Aaron McIntyre added, “The Council is pleased to once again organise this great event and inspire people to come together to get active.

“It was fantastic to see so many participants come out in force to take part in the three events from experienced runners striving for a personal best to those just running with family and friends or their school.  I was delighted to meet so many people around the course earlier when completing the 10K, which was so motivating.

“I would like to thank the council for supporting the event in partnership with their Vitality Membership package, which provides further opportunities for people to get active and have fun together.”

Starting the Fun Run event, Lady Mary Peters, said: “Fun runs are often the first step for people to get involved in physical activity, which can often lead to an interest in other sports or progression onto future running events.

“I remember my own first steps in sport, which led to an Olympic Gold in the Munich Summer Games, 50 years ago, which just shows where early involvement in sport can lead.

“Keeping Active is a great way to improve your health and wellbeing which is so important to everyone, particularly after the challenge of the last two years.

“I would like to congratulate everyone who took part in the event. You should be very proud of your achievement and hopefully it will be the start of many more runs to come!”

To view photographs from the event, please visit www.lisburnhalfmarathon.com or check out the Council’s Sports Development Facebook page, Beactivelisburncastlereagh.