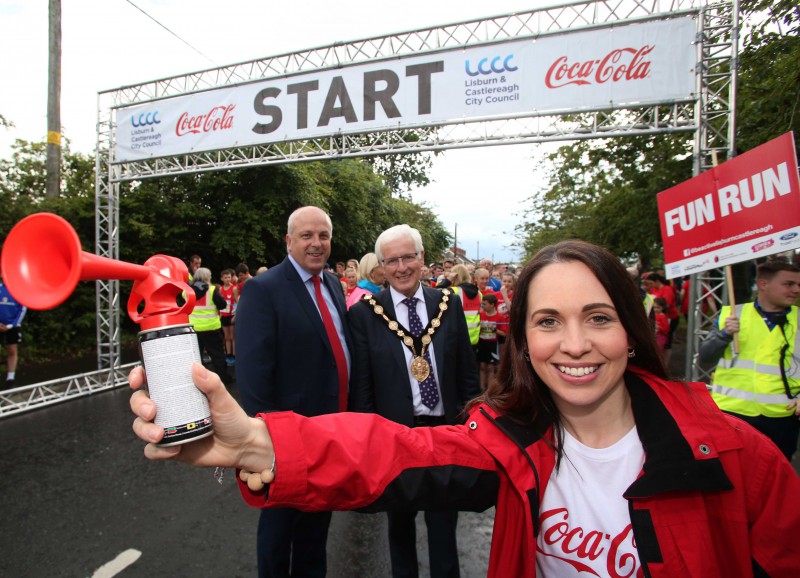 Adrenaline levels soared at the 37th Lisburn Coca-Cola HBC Half Marathon, 10K Road Race and Fun Run as over 6,000 runners descended to the start line on Wednesday 19th June to take part in the popular event.

Organised by Lisburn & Castlereagh City Council, the event saw competitive runners, beginners, families and schools take on the challenge of one of Northern Ireland’s largest running events. The Mayor of Lisburn & Castlereagh City Council, Councillor Alan Givan had the pleasure of officiating the countdown to the Half Marathon, followed by the Chairman of the Council’s Leisure & Community Development Committee, Alderman James Tinsley, who oversaw the start of the 10K Road Race, while Coca-Cola HBC Northern Ireland’s Zoe Cunningham welcomed the thousands of Fun Runners to the start line.

Some of Northern Ireland’s most talented runners crossed the finishing line with the impressive Gladys Ganiel taking top honours in the women’s Half Marathon, while Louise Smith took a well-deserved second spot and Leann Gibson third. In the men’s Half Marathon, Eoin Hughes made it on to the podium in first place, with Chris Madden taking second place and Stephen Wylie finishing a strong third.

The Fun Run was keenly contended with Anna Hedley picking up first place in the female event, followed by Anna Broderick in second and Rebecca Moore in third place. The male Fun Run event was proudly won by Jack McCauseland who excelled to first  place after securing second in the previous two years. Second and third place was won by brothers Finlay Mayne (2nd) and Rudy Mayne (3rd).

Speaking at the event, the Mayor of Lisburn & Castlereagh City Council, Councillor Alan Givan said, “The Council is proud to organise one of Northern Ireland’s largest participatory running events, which for the last 37 years has been a firm favourite with the community, attracting experienced runners, beginners, families and schools.

“I am particularly delighted to officiate the start of the Half Marathon tonight and see so many runners from across Northern Ireland and the Republic of Ireland taking part in this great event, which highlights the calibre of the event on the running calendar.  It was also fantastic to see so many people taking on the challenge of their first Half Marathon and fulfilling their own personal goals.

“Finally I would like to thank Coca-Cola for their support, which is very much key to the success of the event,” concluded Councillor Givan

The Chairman of the Council’s Leisure & Community Development Committee, Alderman James Tinsley added, “The Council has a proud history of organising local and international sporting events and I am delighted that for the 37th year we can continue to organise the Lisburn Half Marathon, 10K Road Race and Fun Run, which inspires people of all ages and levels of fitness across the country to come together to get active.

“It was fantastic to see over 6,000 participants come out in force to take part across the three events from experienced runners striving for a personal best to those just running with family and friends or their school.  The Council is delighted to organise so many sporting events, similar to this one, which provides such a positive platform to encourage people to lead a healthy lifestyle.

“I would like to thank our title sponsors, Coca-Cola HBC Northern Ireland and extend my gratitude to everyone who took part. I hope you all enjoyed the experience. You should all be very proud!”

Zoe Cunningham, Community Affairs Manager, Coca-Cola HBC Northern Ireland said: “Coca-Cola HBC Northern Ireland are proud once again to be part of this event which is focussed just as much on community spirit as it is on being active. Congratulations to all the participants on completing their respective runs, to the winners of this year’s races, to the organisers of another fantastic event and of course to those who helped raise much needed funds for many charitable organisations and came out to offer their support this evening.”